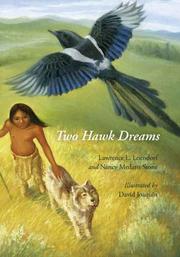 A seasonal move down from the mountains proves adventurous for two Shoshone children in this short historical tale set in what will become Yellowstone National Park.

His seventh summer coming to an end, Two Hawk reluctantly stays behind when his father and older brother go to gather in the big net used to trap bighorn sheep, then, with the rest of the family, he prepares for the annual journey to the lowlands. Three incidents make the trip a memorable one: A mountain lion attacks; Two Hawk’s sister Pipit is nearly swept away in a river; and following vague rumors of white men riding “big dogs,” a strange “hairy-face man” with a fire shooting “stick” comes by for a meal—leaving a handful of beautiful beads in thanks and odd marks on a strip of bark: “J. Colter 1807.” Presumably this is John Colter, a historical figure, the first European in the area, though as there is no historical note, readers are deprived of this or, in fact, much other context. Along with references to water spirits, a magpie brings Two Hawk dreams of flight, timely help, and at the end, promises of long life and wisdom. This mystical thread is echoed in nine full-page paintings from Joaquín that depict physical events, the dream and a Coyote tale that Two Hawk’s father tells, all in the same feathery, indistinct style.

The frights are sharp but just momentary disturbances for a cozy, closely knit clan whose traditional way of life seems only distantly threatened by change.