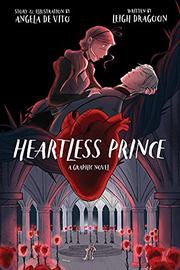 From the Heartless Prince series, volume 1

Princess Evony fights a witch to save the prince she loves.

Orphaned as a baby when a witch attacked her kingdom, Evony was raised by the royal family of neighboring Gallea, which is protected by a magic barrier tied to the heart of its prince. Nineteen years later, the witch returns to steal the prince’s heart, and Evony comes to the rescue—and learns the truth about her own past. After Evony’s adventures with witches, magical creatures, and a blind seer, a small cliffhanger prepares readers for the next installment. The graphic novel is drawn in a recognizably modern Disney style with the clear influence of Japanese manga. Our heroine fights using two sickles and wearing a short, fluttery skirt and thigh-high, high-heeled boots, an outfit reminiscent of Sailor Moon’s. The artist uses color skillfully to create setting and mood, but the art lacks polish overall, and the characters’ faces, in particular, can be awkward. This is unlikely to bother casual younger readers, but it prevents the volume from shining. Though the story is fun and will appeal to those who appreciate magic, sword fights, and princesses who save princes, the story is not especially original or riveting. All the characters appear White.

A light choice for those seeking a fairy-tale adventure.