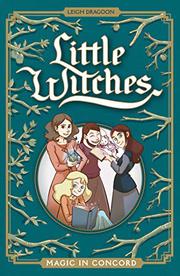 In this new graphic-novel take on Little Women, the March sisters are witches.

When two witch finders move in next door, the March women initially panic. But writer Augustus Laurence and his grandson, Laurie, say they pose no threat—they pursue only witches of the nefarious brand. Meanwhile, crotchety Aunt March insists on training the youngest sister, Amy, in proper witchcraft as her apprentice in exchange for her financial assistance. Jo is quickly distracted from her jealousy by the handsome, charismatic Laurie. When, as in the original story, Marmee departs Concord to visit their father in a Union hospital, the timing couldn’t be worse. Things begin to mysteriously disappear around town: a bolt of silk, a cow, and eventually an actual girl. The March sisters team up with Laurie to get to the bottom of the strange happenings. The witchcraft element isn’t the only departure from the original. Both Laurie and his grandfather are black, and they are not the only townspeople of color; all the Marches are white, however. This story goes awry when Augustus Laurence, a former slave, tells the girls that the reason Africans are slaves in America is because the plantation owners “use magic to keep the slaves tied to them and the land.” This supernatural revisionist history makes mockery of the factual history of kidnapping, brutality, and violence that kept Africans enslaved.