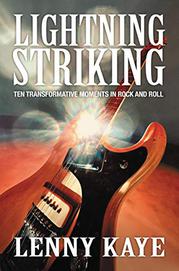 “You can’t be everywhere at once,” writes the author. True enough, but if he missed the Beatles at the Cavern Club or the first performances of Nirvana, Kaye has seen more than his share of shows. More, he has a Marcus-ian (Greil, that is, and not Herbert) depth of historical knowledge that enables him to enumerate the sightings of the very phrase rock ’n’ roll: one, perhaps improbably, in a gospel recording from 1910, a more secular one from 1922. Though a scholar of the many lightning-in-the-bottle moments of which he writes, Kaye is nothing if not an enthusiast; he hails the introduction to Johnny Cash’s “Folsom Prison Blues,” rightly, as one of the most iconic guitar licks in history, adding, “please learn should you be in the vicinity of a C chord.” The author engagingly chronicles his wide travels, visiting New Orleans, London, Memphis, and many other places in search of lost and otherwise magical chords. He was there for some historically important moments, too, from the decline of the Sex Pistols to the rise of the Clash and the earliest stirrings of CBGB. Here, the writing turns distinctly autobiographical as Kaye recalls taking the stage with Patti Smith after grooving to the Ramones, “emulsifying rock and roll down to its primate, all downstrokes and lyrics one step removed from the asylum.” Frankie Avalon has a moment, as does skiffle, the latter of which begat the Beatles, which begat everything else—including, after 1964 and the Ed Sullivan Show, the magical moment when Kaye “bought a cherry red Gibson Les Paul Special and a Magnatone 280 amp (true vibrato, the same kind Buddy Holly played) from a kid down the street who had given up the calling” and jumped into the fray.

If you’re a fan of rock music of whatever flavor, you needthis book.