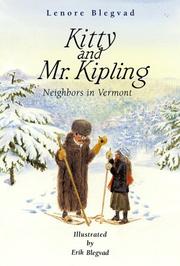 Writer Rudyard Kipling’s ill-fated attempt to settle down in his American wife’s small Vermont town gets a worshipful once-over through the eyes of (fictional) young Mary Sadie—dubbed “Kitty” by her father after the cat killed by curiosity. It’s an appropriate moniker, as Kitty is forever asking questions of her parents and other grownups—a device the author leans on heavily to describe and to explain events that take place, largely, offstage. Kipling’s efforts to help out a ne’er-do-well brother-in-law end in criminal charges and ultimately drive the writer back to England. Before he goes, though, he makes a big impression on Kitty, as a sensitive observer with his own bottomless well of curiosity: “Nothing,” she writes, “was just ordinary to Mr. Kipling.” Occasional ink drawings place dignified characters in peaceful rural settings. Though weighed down by an excess of historical detail (not to mention a substantial afterword and bibliography), the tale does bring this great writer closer to his modern audience of Best Beloveds, without idealizing either the man or his now-offensive politics. (Fiction. 10-12)