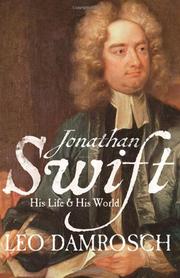 His Life and His World

A feisty, first-class life of the sage and scourge of English Literature.

Besides being a great essayist, satirist, novelist and poet, Jonathan Swift (1667–1745) was a very public man: a social-climbing Anglican minister, a friend to Alexander Pope, a competitor of Daniel Defoe and Laurence Sterne, a stalwart nationalist of Ireland—where he would be consigned to live—and a man whose shifting political allegiances forced him to publish his fiercest critiques anonymously (if only just barely). He masked himself in other ways, as well, leaving behind enough private contradictions and obscurities to keep biographers busy to this day. Damrosch (Literature/Harvard Univ.; Tocqueville’s Discovery of America, 2010, etc.) is bent on both correcting the record and adding to it, creating a fresh and vivid life even as he wrestles with previous biographers—namely Irvin Ehrenpreis—along the way. Damrosch explores the mystery of Swift’s parentage as well as his concealed Betty-and-Veronica relationships, one with the loving and devoted “Stella” (Hester Johnson)—whom he may have secretly married and who is buried next to him—and one with the temptress “Vanessa” (Esther Vanhomrigh). Damrosch also amply scrutinizes Swift’s inner life: Was this preacher who absolutely insisted on churchly tithes even a true believer? Was Gulliver’s Travels misanthropic or, as Methodist founder John Wesley suggested, an honest examination of mankind at its worst? Damrosch gets close to Swift as both a talented author and a man, detailing his frustrations, habits and multiple physical torments from deafness, vertigo and a variety of odd ailments. (“The spots increased every day and had little pimples, which are now grown white and full of corruption, though small…I cannot be sick like other people," he wrote, "but always something out of the common way.") This is the kind of biography where you come to feel you know the subject personally.

A rich and rewarding portrait of an irreplaceable genius.