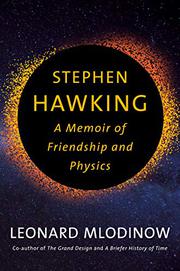 A Memoir of Friendship and Physics

Stephen Hawking (1942-2018) was the world’s most famous scientist. Sadly, it was his paralysis, rather than his discoveries, that made him almost universally recognizable. In 2003, Hawking contacted physicist and author Mlodinow to help with his popular science writing. Here, the author recounts their friendship as well as Hawking’s earlier life and makes an earnest attempt to explain his work. In 1963, beginning doctoral studies at Cambridge, Hawking developed amyotrophic lateral sclerosis, a progressive nerve degeneration that leads to paralysis and death. This devastating news, writes Mlodinow, left Hawking with “the choice of wasting away in spirit as well as body or finding a world of the mind in which he could still function. Where some in his situation found God, Stephen found physics.” Almost completely paralyzed by 1990, he continued work despite requiring 24-hour care. An American foundation helped at first, but it was popular writing, beginning with his 1988 bestseller, A Brief History of Time, that enabled him to bear the massive expenses associated with this care. Einstein’s iconic 1905 theory of special relativity, with its revelations on time, mass-energy, and light, have revolutionized our daily lives and technology. However, Hawking concentrated on Einstein’s 1915 theory of general relativity, which explains how gravity and space deviate from Newton’s simpler laws only at extremes—the massive gravity of stars and black holes or cosmic distances and times. As a result, scientists largely ignored it until Hawking took an interest in the 1960s. His controversial findings on the nature of black holes galvanized fellow physicists. The Big Bang idea originated in 1927, but Hawking’s calculations provided evidence that it happened. Mlodinow doesn’t delve deeply enough into Hawking’s unique brilliance, but he provides an illuminating portrait of perseverance and determination.

A valuable account of an extraordinary man, although most readers will have to accept Hawking’s genius on faith.