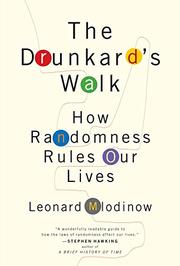 How Randomness Rules Our Lives

Forget about planning for the future: Chaos is king, the random reigns and no system can beat the house odds.

So one might conclude from onetime Caltech physicist Mlodinow’s spry look at the rising field—and, it seems, publishing trend—of what might be called randomness studies. As he writes, affectingly, his mother, who survived the Holocaust, subscribed to the forget-planning school after her careful sister was consigned to death. Her experience, he writes, “has taught me to appreciate the absence of bad luck, the absence of events that might have brought us down, and the absence of the disease, war, famine, and accident that have not—or have not yet—befallen us.” Small comforts, perhaps, but the case studies he assembles point strongly to the essential vanity of human wishes, whether they be efforts to beat the odds at Vegas or to predict the chartbusting potential of a screenplay. On the second note, Mlodinow (Feynman’s Rainbow: A Search for Beauty in Physics and Life, 2003, etc.), who knows his Hollywood, quotes a studio executive who once remarked, “If I had said yes to all the projects I turned down, and no to all the other ones I took, it would have worked out about the same.” Thus randomness, which plays havoc with probability and makes it devilishly hard for ordinary mortals to discern trends and, moreover, exceptions to trends. Mixing hard science with an easygoing approach that makes liberal but not annoying use of pop-culture references, Mlodinow ventures onto conceptually strange ground: the law of the sample space, for instance, which is supposed to apply “only to outcomes that are equally probable” but manages to find, yes, exceptions. He delights in finding the limits of probability, as with the elderly French woman who mortgaged her desirable apartment to a young lawyer who was to take it over after her death, then proceeded to outlive him—indeed, to attain the age of 122, skewing all the statistics.

A science geek’s delight, and useful reading for the inveterate gambler of the house.