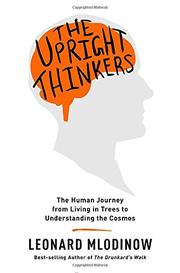 The Human Journey from Living in Trees to Understanding the Cosmos

A selective, guided tour of the human accumulation of knowledge from American physicist and former CalTech instructor Mlodinow (Subliminal: How Your Unconscious Mind Rules Your Behavior, 2012, etc.).

In this smooth celebration of the human project, the author places a decided emphasis on its cerebral aspects: “The thirst for knowledge is the most human of all our desires.” If at times Mlodinow drifts into hubris—“we have shaped our environment to our needs, rather than allowing our environment to shape—or defeat—us”—it can be excused as a byproduct of his enthusiasm, the thrill of deciphering nature’s puzzle and appreciating the striking characters who pioneered scientific discoveries. It is an endlessly fascinating story, this ineluctable quest that required getting out of the head’s comfort zone and accepting change, and Mlodinow’s explanations of often perplexing thinking are easy to digest. He throws out ideas and theories that are consistently thought-provoking—e.g., “Animal brains first evolved for the most primal of reasons: to better enable motion.” The author divides the book into three sections: the development of the human mind, touching down at critical junctures; the revolutionary entrance of the hard sciences; and quantum physics, developed thanks to the “brainpower in Central Europe,” which Mlodinow fittingly introduces via Tom Stoppard (“It’s the best possible time to be alive, when almost everything you thought you knew is wrong”). Though the book has a snug cohesiveness, the author clearly enjoys his role as storyteller, introducing entertaining, illuminating asides—e.g., Lucy, Australopithecus afarensis, “had a huge belly,” because she was primarily vegetarian; and “fortunately for science, in the Arab world the ruling class did find value in Greek learning.” Mlodinow also reacquaints readers with significant characters, from Galileo to Planck, who made the incomprehensible comprehensible.

A breathtaking survey of the human mind exponentially accelerating the accumulation of knowledge, from pratfalls to ventures beyond the veil.