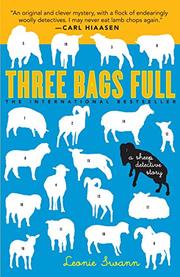 Just when you thought you’d seen a detective in every guise imaginable, here comes one in sheep’s clothing.

For years, George Glenn hasn’t been close to anyone but his sheep. Everyday he lets them out, pastures them, reads to them and brings them safely back home to his barn in the guilelessly named Irish village of Glennkill. Now George lies dead, pinned to the ground by a spade. Although his flock haven’t had much experience with this sort of thing, they’re determined to bring his killer to justice. There are of course several obstacles, and debut novelist Swann deals with them in appealingly matter-of-fact terms. Sheep can’t talk to people; they can only listen in on conversations between George’s widow Kate and Bible-basher Beth Jameson. Not even the smartest of them, Othello, Miss Maple (!) and Mopple the Whale, can understand much of what the neighborhood priest is talking about, except that his name is evidently God. They’re afraid to confront suspects like butcher Abraham Rackham and Gabriel O’Rourke, the Gaelic-speaking charmer who’s raising a flock for slaughter. And even after a series of providential discoveries and brainwaves reveals the answer to the riddle, they don’t know how to tell the Glennkill citizenry.

All these problems are handsomely solved at the unsurprising cost of making the human characters less interesting than the sheep. But the sustained tone of straight-faced wonderment is magical.