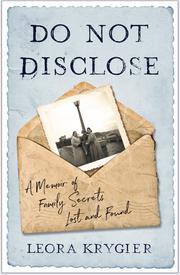 A Memoir of Family Secrets Lost and Found

The accidental discovery of a private document begins a journey that reveals secrets of family members and strangers in this multifaceted memoir.

Krygier, a Los Angeles juvenile court judge, was on her way to work one day when she dropped by her parents’ house to find her mother conducting a cleanup campaign. Among the strewn paper, the author came across a file bearing the note: “Do Not Share This.” She surreptitiously grabbed the file and set off for court; however, she was hesitant to open it, fearing that it would reveal unbearable secrets about her family’s past. Days later, Krygier found a World War II–era postcard in an antiques mall, written by a British Army private and marked “do not disclose any particulars of your unit.” The message resonated with the author, and she began searching for details about the postcard’s sender—a quest that would later bring her to England. The book also slowly reveals details of the file’s contents as Krygier pieces together her family’s story of infidelity and Holocaust survival. Although written as a memoir, this book has all the suspense of a detective novel as the author hunts for the elusive British soldier and attempts to delay learning the truth about her own family. Along the way, she proves to be a master of the slow reveal, alluding to a night “when all hell broke loose” at the memoir’s opening and only gradually disclosing the details of what happened. Krygier also has a vibrant prose style and an eye for fine detail, characterized by her description of a typewriter: “The keys had to be struck hard. They were round, with a distinct rim, like tiny, old-fashioned spectacles. Each letter clattered downward and commandeered its own individual amount of ink from the ribbon, none uniform.” There are rare occasions when the author includes unnecessary information, such as automated responses to her internet searches, but such details of her setbacks make her successes even more enjoyable. This richly detailed memoir will particularly appeal to those whose imaginations are fired by genealogy and historical research.