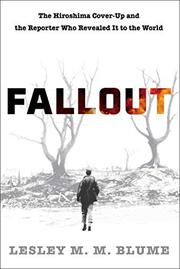 Los Angeles–based journalist Blume uncovers the fascinating backstory to perhaps the most influential piece ever published by an American magazine: John Hersey’s 1946 report on the atomic bombing of Hiroshima.

After the catastrophic August 1945 bombings in Hiroshima and Nagasaki, justified by President Harry Truman and other officials as necessary to end World War II, the American public witnessed a barrage of government propaganda about how the attacks had been what Secretary of War Henry Stimson called “ ‘our least abhorrent choice’ when it came to ending the war with Japan. In Stimson’s telling, the nuclear option was once again depicted as humane.” At the time, most American journalists tended to disseminate the propaganda; for at least a year after the bombings, few Americans—or global citizens—knew “what had actually transpired beneath those roiling mushroom clouds. Then, on Aug. 31, 1946, the New Yorker devoted its entire issue to a 30,000-word account by Hersey about the human toll in Hiroshima. About 42,000 Hiroshima residents had died quickly while countless more were suffering horrible aftereffects of radiation. The eventual number of fatalities is estimated at 280,000. Blume skillfully relates the biography of the still young but already well-known Hersey; his remarkable collaboration with New Yorker editors Harold Ross and William Shawn; and Hersey’s inspiration for his decision to structure the article around six Hiroshima survivors. “It was simply a question of scale,” writes the author. “Hersey would dial it down from God’s eye level to a human vantage point.” Blume's narrative explaining how Hersey gained access to Hiroshima, despite obstacles raised by the U.S. military, never flags in its drama. The author also provides endlessly interesting anecdotes about the aftermath of the publication of “Hiroshima,” which eventually became a bestselling book. Hersey continued to be both lionized and criticized until his death in 1993, and his work has continued to inform debates about the appropriate use of nuclear weapons.

Highly recommended as a work of historical excavation regarding a watershed publication.