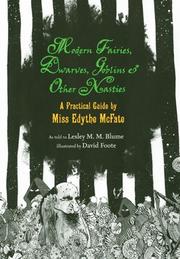 Writing as authority “Miss Edythe McFate,” Blume reveals that, even in New York, fairy folk are all around—having adapted to the urban environment—and so city children had best take special care not to run afoul of them. In two-dozen short chapters she introduces many types, explains their powers and (usually mischievous) proclivities and dispels common superstitions. She also suggests doable practices and strategies to stay on their good sides, such as leaving dishes of warm water, flower petals and Gummi bears around the house and ushering inchworms and ladybugs (all of which are fairy pets) found indoors back outside rather than killing them. Along with frequent weedy borders and corner spots, Foote adds portraits of chubby or insectile creatures, often in baroque attire. Interspersed with eight original tales (of children rescuing brownies ejected from the Algonquin Hotel during renovations, discovering a magical farm behind a door in the Lincoln Tunnel and so on), this collection of lore (much of it newly minted) offers an entertaining change of pace from the more traditional likes of Susannah Marriott’s Field Guide to Fairies (2009). (Informational fantasy. 10-13)