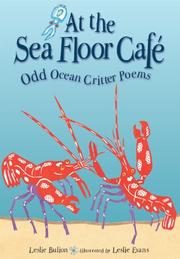 AT THE SEA FLOOR CAFÉ

From snapping shrimp with bubble-shooting claws to the Osedax worm that digests whalebones on the ocean floor, intriguing and unusual sea creatures are introduced in this collection of 18 engaging poems written in a variety of forms. A paragraph or two of identification and explanation follow each poem. This attractive small volume is illustrated with hand-colored linoleum block prints set on a blue-green background that darkens page by page as the reader descends. “Dive In!” introduces the habitat, and, on the last page, “Hooray for the Sea and the ROV” celebrates the ocean and the vehicles humans use to explore its deepest parts. One piece calls for two voices, a leopard sea cucumber and an emperor shrimp. Shape poems introduce the violet snail and a swarm of krill. These poems lend themselves to reading aloud, and many are short and catchy enough to be easily memorized. Concluding with a helpful glossary, a clear explanation of the poetic forms that points out rhymes, patterns and beats, suggested further resources and acknowledgements, this is an ideal title for cross-curricular connections. This gathering of humorous poetry and fascinating facts should be welcomed as a companion to Bulion and Evans’ previous collaboration, Hey There, Stink Bug! (2006)—even the surprise among the school of krill on the endpapers will make readers smile. (Informational poetry. 8-12)