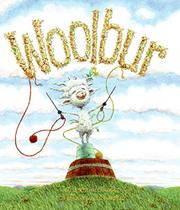 Woolbur is a free-spirited lamb; he’d rather run with the dogs than stand with the flock. Grandpaa says not to worry, but Maa and Paa pull on their wool all night long. Woolbur has trouble with shearing (he likes being wooly), carding (he tries carding wool while it’s still on his body), spinning (he’d rather ride the spinning wheel) and weaving (he weaves his own forelock into his art project). When his parent’s worry that he looks and acts so different, Woolbur repeatedly responds, “I know. Isn’t it great?” Finally, his parents put their hooves down and order him to act like every other sheep. Woolbur, ever the individual, has a solution to this as well. Harper’s lumpy, expressive ovines, especially the wild-wooled Woolbur, bring Helakoski’s delightful tale of independence to life. The surprising twists in a text full of repetitive language is proof that Helakoski’s barnyard hoot Big Chickens (2006) was no fluke. Hopefully she’ll turn out a whole flock as fun as this. (Picture book. 3-7)