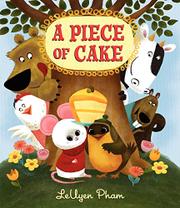 A PIECE OF CAKE

Bringing his friend a birthday surprise isn’t exactly a piece of cake for Mouse.

Mouse bakes a delicious birthday cake for his friend, Little Bird, but as he takes the walk to deliver it to Little Bird’s house, various animals along the way entice him to share pieces with them. In return, they offer him miscellaneous tokens of thanks. He feels bad when he arrives at Little Bird’s house with a cork from Chicken, a wire from Squirrel, a butterfly net from Bear and a flyswatter from Cow, but Little Bird has a big plan. It turns out each animal who was eager to swap something for cake needs something that another animal traded. By fulfilling these needs, Little Bird and Mouse obtain ingredients to make a new cake—milk from Cow, honey from Bear, nuts from Squirrel and eggs from Chicken. The fun comes with the surprising solutions that Little Bird and Mouse offer: They don’t give Bear a flyswatter to shoo away the bees swarming near the honey he’s collected, for example; they give him the cork to plug up the hive. (Here’s hoping Bear removes it when he leaves, or that’s the last honey he’ll be collecting.) Digitally colored pencil illustrations lack the sketchy, expressive charm of Pham’s Big Sister, Little Sister (2005) and instead adopt a flat, humorous cartoonish quality that’s reminiscent of some of illustrator Peter Brown’s work.

A treat of a birthday picture book.