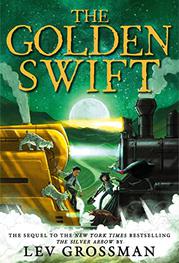 From the Silver Arrow series, volume 2

Eleven-year-old Kate absolutely adores her secret job—helping animals in need by using the magical locomotive that was a gift from her billionaire wizard uncle. Kate loves riding the Silver Arrow with Uncle Herbert; her brother, Tom; and the talking animals they escort to safe places. But now Uncle Herbert is missing, 9-year-old Tom seems more interested in hapkido than their supernatural train, and Kate’s struggling socially and academically thanks to her eco-anxiety. No matter how many animals she helps, no matter how many adults proclaim that climate change is a critical issue, the environment keeps getting worse. One night Kate discovers another train driving on the magical railroad: The Golden Swift is conducted by her classmate Jag, who thinks rescuing stranded creatures isn’t sufficiently radical. When Kate joins him, she feels more inspired and more righteous than ever before. This time, she’s actually making the world better! Kate’s unhappy discoveries of unintended consequences and the moral complexities of her activism are softened by humor. The snarky banter of the talking locomotive is an understated delight, as is the train constructed with, among others, candy and ice cream cars, an invisible car, and a dojo car. Kate and Tom are White; Jag is described as having dark skin and black hair and possibly being Indian. Charming illustrations enhance the text.