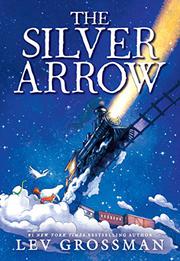 From the Silver Arrow series, volume 1

The best birthday present is a magical train full of talking animals—and a new job.

On Kate’s 11th birthday, she’s surprised by the arrival of rich Uncle Herbert. Uncle Herbert bears a gift: a train. Not a toy train, a 102.36-ton steam engine, with cars that come later. When Kate and her brother, Tom, both white, play in the cab of the Silver Arrow, the train starts up, zooming to a platform packed with animals holding tickets. Thus begins Kate and Tom’s hard work: They learn to conduct the train and feed the fire box, instructed by the Silver Arrow, which speaks via printed paper tape. The Silver Arrow is a glorious playground: The library car is chockablock with books while the candy car is brimful of gobstoppers and gummy bears. But amid the excitement of whistle-blowing and train conducting, Kate and Tom learn quiet messages from their animal friends. Some species, like gray squirrels and starlings, are “invaders.” The too-thin polar bear’s train platform has melted, leaving it almost drowned. Their new calling is more than just feeding the coal box—they need to find a new balance in a damaged world. “Feeling guilty doesn’t help anything,” the mamba tells them. Humans have survived so effectively they’ve taken over the world; now, he says, “you just have to take care of it.” (Illustrations not seen.)

Both cozy and inspiring, this eco-fable conveys both grim truths and a defiant call to action.