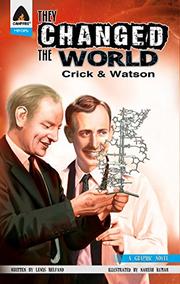 THEY CHANGED THE WORLD

From the Campfire Heroes series

The story of the discovery of the structure of DNA, in graphic format.

Failing to take advantage of either the format or the historic search’s drama, this rendition presents a portentous account heavy on explication and melodramatic rhetoric and featuring a cast of grimacing or pinched-looking figures spouting wooden dialogue. Watson: “So if we combine our research with Rosalind’s data and…” Crick: “And Linus’s approach of building models. We might be able to figure this out.” Helfand diffuses the focus by paying nearly as much attention to the childhoods and early careers of Linus Pauling, Maurice Wilkins, and Rosalind Franklin as he does to Watson and Crick but downplays the rivalries that drove the race. Also, for all the technical detail he injects (“the phosphates would have to be on the outside”) and further explanations in the back, readers will be left in the dark about the role of genes, how DNA actually works, or even the significance of its double helix structure. A closing note about the contributions of Indian-born Nobelist Har Gobind Khorana adds a note of diversity to the all-white cast.

Give this a pass: much clearer pictures of what DNA does and the strong personalities who were involved in winkling out its secrets are available.