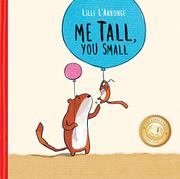 ME TALL, YOU SMALL

Readers tall and small will recognize themselves between the pages of this book.

This sparsely worded picture book exudes the pleasure that emanates from the relationship between a caring adult and a child. Beginning with “Me tall / You small,” the text progresses through other mostly rhyming descriptors, some of them nonsense (bop, bip; whoop, droop; tired, wired), that show the contrasts between an exceedingly energetic child and an adult who vacillates between matching exuberance and exhaustion. Readers will delight in the way the adult attends to the child, acts silly right along with the child, and gives kudos to the child for often being cooler or smarter than the adult. The anthropomorphic weasels walk upright, live like humans, and are androgynous enough for readers to interpret them as any gender. Some might even read the story as a friendship between a child and an older friend or caregiver rather than a parent. On the book’s endpapers appear what look like drawings on a chalkboard of everyday items such as a brush, toothbrush, underwear, umbrella, chair, and other household and personal items that the characters might use on a typical day. Stylistically similar to Cliff Wright’s Bear and Ball books and Olivia Dunrea’s Gossie series, this sweet picture book, translated from German, will find eager fans among American readers.