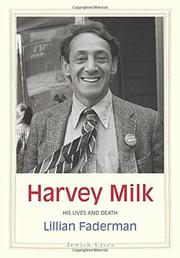 His Lives and Death

A new biography of the controversial and groundbreaking Harvey Milk (1930-1978).

In this latest installment of the publisher’s Jewish Lives series, LGBT historian Faderman (The Gay Revolution: The Story of the Struggle, 2015, etc.) focuses on one of the most revolutionary West Coast gay politicians of the 20th century. Born to a Jewish family, Milk struggled to find his place in the society that surrounded him, regardless of where he lived and went to school. As the author writes, “Harvey was steeped in Jewishness as a child….But his heart was not in it. He later claimed that he rejected religion because when he was twelve years old he ‘found out that religion was phony or hypocritical.’ ” Milk’s ability to see things as they were—to see through the protective membranes of societal and cultural preconceptions—is what set him apart as a deeply insightful politician. He clearly identified the major issues in his community and addressed them head-on. Faderman deftly navigates us through Milk’s incredible journey, from his days exploring the Navy’s gay haven to his experience in the early 1970s in New York scrapping pennies to pay the rent on his Greenwich Village apartment to his arrival to California, where he quickly became a staple in the Castro District, the notoriously gay neighborhood in San Francisco. The author naturally devotes much of the text to Milk’s political accomplishments, including his work against the discriminatory Proposition 6, voter registration drives, and, above all, being the first openly gay man elected as city supervisor. Though Milk’s story is well-known, Faderman does a fantastic job at reanimating a story that reminds us that people can be truly tolerant—with the exception of the few—and that, with will (not money), anyone can effect change.