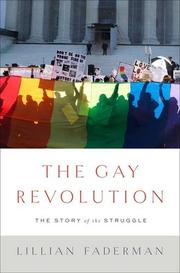 The Story of the Struggle

The history of the struggle for gay rights in the United States.

In this superbly researched book, acclaimed LGBT scholar Faderman (My Mother’s Wars, 2013, etc.) examines the roots of the sociopolitical movement that, for the last 60 years, has worked to achieve justice for LGBT people. The author begins in the 1950s, when “the government, the law, the church, [and] the psychiatric profession all colluded to tell homosexuals they were guilty just by being who they were.” Yet a brave few individuals—e.g., Harry Hay, Phyllis Lyon, and Del Martin—took action by creating organizations intended to offer safe alternatives to gay and lesbian bars. In these groups, homosexuals could offer each other support and seek the respect they desired from mainstream heterosexual society. As the organizations grew, they assimilated ideas from such political catalysts as the burgeoning civil rights movement. By 1969, the Stonewall riots revealed a far more radicalized community, contingents of which created political groups that actively agitated for civil rights rather than simple respect. Mainstream society responded with “family values” movements led by such icons as Anita Bryant. Her anti-gay zeal actually worked to unite the LGBT community and help its members push for political change at the local and then, into the 1980s and beyond, national levels. Faderman documents the tragedy of AIDS and how that epidemic also brought together gays and lesbians and created a still greater sense of solidarity among homosexuals, who, by the 1990s, had begun to press for workplace protections as well as recognition of gay and lesbian families. The author concludes with the Supreme Court’s 2013 decision to strike down the Defense of Marriage Act, specifically its provision that marriage be defined in heterosexual terms only. Throughout this engaging and extremely well-documented book, Faderman clearly shows that for the LGBT community, equality is not a completed goal. Yet the ideal of fully integrated citizenship is closer to becoming reality than ever before.