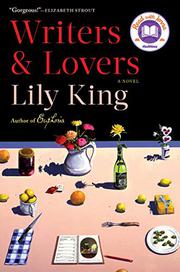 A Boston-area waitress manages debt, grief, medical troubles, and romantic complications as she finishes her novel.

“There are so many things I can’t think about in order to write in the morning,” Casey explains at the opening of King’s (Euphoria, 2014, etc.) latest. The top three are her mother’s recent death, her crushing student loans, and the married poet she recently had a steaming-hot affair with at a writer’s colony. But having seen all but one of her writer friends give up on the dream, 31-year-old Casey is determined to stick it out. After those morning hours at her desk in her teensy garage apartment, she rides her banana bike to work at a restaurant in Harvard Square—a setting the author evokes in delicious detail, recalling Stephanie Danler’s Sweetbitter, though with a lighter touch. Casey has no sooner resolved to forget the infidel poet than a few more writers show up on her romantic radar. She rejects a guy at a party who reveals he’s only written 11 1/2 pages in three years—“That kind of thing is contagious”—to find herself torn between a widowed novelist with two young sons and a guy with an irresistible broken tooth from the novelist's workshop. Casey was one of the top two golfers in the country when she was 14, and the mystery of why she gave up the sport altogether is entangled with the mystery of her estrangement from her father, the latter theme familiar from King’s earlier work. In fact, with its young protagonist, its love triangle, and its focus on literary ambition, this charmingly written coming-of-age story would be an impressive debut novel. But after the originality and impact of Euphoria, it might feel a bit slight.

Read this for insights about writing, about losing one’s mother, about dealing with a cranky sous-chef and a difficult four-top.