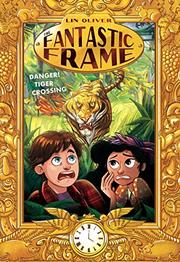 From the Fantastic Frame series, volume 1

Two kids get up close and personal with some great works of art in this first in a new series.

Tiger Brooks is used to his little sister’s fantastical stories. So when the top-hatted orange pig she describes turns out to be not only real, but a next-door neighbor, Tiger enlists the help of his kooky new friend, Luna, to investigate. It turns out the pig works for the reclusive painter Viola Dots. Years ago a magical picture frame swallowed up her only son, and she’s searched for him in artworks ever since. When Tiger’s tinkering starts the magic up again, he and Luna are sucked into a reproduction of Henri Rousseau’s Surprised! or Tiger in a Tropical Storm, hungry predator and all. After meeting and failing to rescue Viola’s son in this adventure, the series is set up for the intrepid pair to infiltrate other classic paintings in the future. Backmatter provides information on the real Rousseau and his life. Oliver keeps the plot itself snappy and peppy. While there are few surprises, there’s also an impressive lack of lag time. This is helped in no small part by Kallis’ art, which goes from pen-and-ink drawings to full-blown color images once the kids cross over into the painting. Tiger is a white boy, and Luna is a dark-haired Latina.