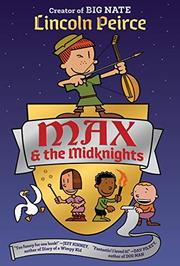 MAX AND THE MIDKNIGHTS

From the Max & the Midknights series, volume 1

In the 14th century, young Max yearns to buck convention and be a knight.

In this fictional, European-esque kingdom, Max lives with Uncle Budrick, a comically terrible troubadour. Children in Byjovia follow in the career footsteps of their families; Max however, dreams not of songs and lutes but of becoming a knight. When Budrick is captured by the nefarious usurper King Gastley, Max finds a crew of like-minded kids and forms the Midknights. Together they fight an evil sorceress, zombies, and winged rats in their efforts to save Max’s uncle and, ultimately, the kingdom from Gastley’s evil grasp. This middle-grade graphic/prose hybrid plays with gender conventions, mixing in a feel-good theme reaffirming that everyone should be able to follow their dreams and defy pre-existing gender constructs. Plucky, gender-nonconforming Max makes a heartfelt soliloquy imploring the king to allow bothgirls and boys to pursue what they love, be it magic, knighthood, or writing. The zippy mix of prose and comics panels rockets along with quick plotting and lots of funny medieval madcap antics. Peirce’s black-and-white illustrations will be stylistically familiar to fans of his Big Nate series and should resonate with fans of Jeff Kinney’s Wimpy Kid. Main character Max presents white, as are most of the Midknights with the exception of one dark-skinned boy; one other is chubby, and a secondary adult character uses a leg prosthesis.

A knight’s tale in shining armor.