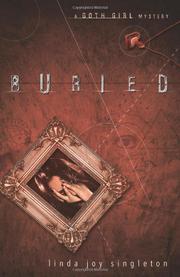 Goth-girl teen with magical “finding” powers unravels the mystery of a dead baby in this first book in a new paranormal series.

The goth-tastic Thorn, from Singleton’s The Seer series, is forced to move from California when her father loses his job. Luckily, her minister mother finds a new gig. Only trouble is, it’s in Nevada, years-of-enlightenment from home. Thorn survives by befriending Rune, the one other goth at their ultra-conservative high school. When a random lost locket weirdly leads Thorn to a half-buried baby—OMG! She’s suddenly under suspicion. In defense, Thorn investigates contestants in the Nevada Bluff High Singing Star contest, while drama swirls around NBH-alum musician Philippe, the angel-wing-wearing Amerie, the Cotton Candy Cowgirls and the mysterious vigilante dude who disguises himself as “the Grin Reaper.” Thorn believably struggles with her judgmental father and community disapproval of her controversial identity (“As a rule, I don’t follow rules”). Will the hullabaloo cost her mother her job? At a quick pace with layered plotting, narrator Thorn unearths her true self, coming to appreciate her own musical gifts and even her all-too-human mother (“I’m a minister, not a saint”).

A good-humored romp with a series-opening unresolved ending; chances are good that goth mystery fans will be too buried in zany clues to notice