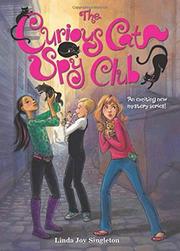 Three children from disparate social groups at middle school team up to solve a mystery, becoming friends in the process, in this series kickoff.

Kelsey Case, a budding spy, is shy and quiet; Becca Morales, whose mom runs an animal sanctuary, is bubbly and popular; and Leo Polanski—well, he’s just weird. But also brilliant and much better characterized than the two more generic girls. The plot is set in motion when Kelsey rescues Becca’s runaway zorse (a horse/zebra cross) and hears mewing coming from a dumpster. Big-brained Leo is able to figure out how to move the heavy top, and the children find three kittens in a bag along with a clue, a receipt from a pet supply store. Determined to save the kittens and find the culprit, the three unlikely compatriots form a secret group, the titular Curious Cat Spy Club. Unfortunately, after the engaging setup, a long dry spot ensues as the children work the mystery and get to know each other, and the story doesn’t catch fire until the suspenseful final quarter. Although the novel clearly ends with the mystery solved, it leaves enough relationship questions unresolved to hopefully start the next installment at a gallop.

Although readers may have to push through the slow-moving middle, this enjoyable mystery has a satisfying ending and a neatly calibrated level of suspense for middle school readers