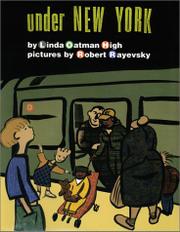 Children, urban or otherwise, will marvel along with High (Barn Savers, 1999, etc.) at all that is to be found beneath New York City's "offices and theaters and stores," "families and homes and schools," "garbage and car horns and billboards." It's not just rocks, pipes, and cables, but rumored alligators and real elephants (the latter on their way under the Hudson River to a circus at Madison Square Garden), restaurants and subway stations, an immense water main still under construction, tunnels carrying everything from shoppers to trains. Rayevsky (Joan of Arc: The Lily Maid, 1999, etc.) incorporates photographs and children's drawings into a series of split-page, above-and-below-ground, urban cross-sections, some generic, others featuring recognizable landmarks. Penumbral colors, further darkened by thickly brushed outlines, convey the impression that city residents seldom see the sun, but no one here seems to mind it. Though not exactly an unqualified valentine to the city that never sleeps, this does afford a playful glimpse of its complexity. (afterword, personal comments from author and illustrator) (Picture book. 5-8)