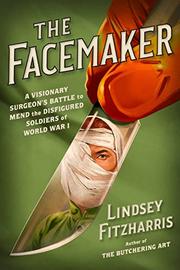 The author of The Butchering Art returns with “a new perspective on the terrible consequences of trench warfare, and the private battles that many men fought long after they put down their rifles.”

“Disfigured soldiers,” writes Fitzharris, “often suffered self-imposed isolation from society following their return from war.” While this has been true throughout history, the vast increase in military technology during World War I produced an avalanche of torn flesh and mutilated body parts that overwhelmed surgeons. Among more than 20 million injured, nearly 300,000 soldiers suffered facial trauma. In this often graphic yet inspiring, engaging book, the author focuses on Harold Gillies (1882-1960), a successful British ear, nose, and throat surgeon whose pioneering work in repairing faces places him among the war’s few true heroes. Sent to France early in the war, he observed freelance dental surgeons (the Royal Army Medical Corps had none) experimenting with facial reconstruction. He quickly established that the first principle of battlefield surgery—to close gaping wounds—was a disaster for jaw and facial injuries. Unless the damaged underlying structures were repaired first, the procedures guaranteed a grotesque end result. Returning to the Queen’s Hospital in London, Gillies persuaded the chief surgeon to establish a facial injury ward, which eventually grew to more than 1,000 beds and employed dozens of surgeon, dentists, artists, and sculptors who pioneered a new specialty: plastic surgery. The author’s case reports of individual soldiers are not for the faint of heart, but she delivers a consistently vivid account of the ingenious techniques involving skin flaps, grafting, reconstruction, and prostheses, most of which Gillies and colleagues invented. Many victims required dozens of painful procedures, and not all succeeded, but his accomplishments, along with his compassion, made him an object of worship from patients. A “genuine visionary in his field,” he received a good deal of favorable publicity in the media but only modest official recognition, including a knighthood in 1930, and he continued to practice until his death.

An excellent biography of a genuine miracle worker.