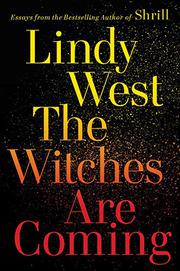 THE WITCHES ARE COMING

In 18 pointed essays, the author addresses a variety of topics, including frivolous internet sensation Grumpy Cat, South Park, Guy Fieri, and the global significance of abortion rights and gender equality. In West’s opening tirade, she denounces Donald Trump’s repetitive usage of the term “witch hunt” while scrutinizing his uncanny “ability to conjure reality out of hot air and spittle.” This essay serves as the launching pad for further pieces exposing the sorry state of contemporary American politics and popular culture. Tough, irritated, and eager to speak her truth, the author expounds on the unifying aspects of visibility and activism to cultivate change, especially when countering the denigration of women. Her sharp wit and no-nonsense sense of humor also shine through her dissection of the work of Adam Sandler, Gwyneth Paltrow’s diet plan (her avocado smoothie “could give diarrhea an existential crisis”), and how movies like Clue shaped her perspectives and appreciation for one-liners and physical comedy. West rarely minces words, especially regarding documentaries on the Ted Bundy murders and the Fyre Festival or when expressing her sheer appreciation for the legacy of Joan Rivers, and her writing is fluid and multifaceted. Though she often rages at social injustice, she also becomes solemnly poetic when discussing her fondness for the drizzly Pacific Northwest, where she was raised and still resides, a place where she can still feel her deceased father’s presence “in the ridges and grooves of my city—we are close, superimposed, separated only by time, and what’s that? This is the only religion I can relate to.” Only occasionally are the smoothly written essays hijacked by intrusive asides—e.g., her experience inside a proselytizing Uber driver’s car, a scene wedged into her reflections on climate change. Though uneven at times, the author drives home the critical issues of our time while taking time to tickle our funny bones.