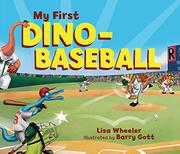 In this board-book companion to Wheeler and Gott’s earlier Dino-Sports picture-book series, readers land smack-dab in the middle of an exhilarating baseball game featuring dinosaur characters. The opening pages read “Leather mitts. // Dino-bat. // Cleats on feet. // Baseball hat,” as the illustrations show a play-by-play: a Triceratops on the mound gearing up for a pitch; a hitter (a Baryonyx?) loading the bat, launching a shot, and running the bases; and two outfielders frantically returning the ball to the infield for the out. In this brisk fashion, the face-off between the herbivorous Green Sox and the carnivorous Rib-Eye Reds unfolds. There isn’t room in the brief text to depict a full nine innings, though both teams are shown playing offense and defense. At one point, Gott capitalizes on the sheer size of some dinosaurs by humorously placing what looks to be a towering Apatosaurus in the outfield. Later, this same gentle giant scores a run, delivering what some may see as an unlikely win for the plant-eating Sox. The spare, rhyming text, action-packed narrative, and colorful digital art combine for toddler-friendly fare. What could have read as an awkward switch to the past tense in one instance (“Pitcher throws. // Dino missed. // Try again. // Dino hits!”) is eased by Gott’s visual interpretation showing the baseball in the catcher’s mitt after the small dinosaur up to bat misses it.

A hit for dinosaur fans in the toddler set.