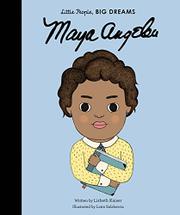 “There’s nothing I can’t be,” young Maya thinks, and then shows, in this profile for newly independent readers, imported from Spain.

The inspirational message is conveyed through a fine skein of biographical details. It begins with her birth in St. Louis and the prejudice she experienced growing up in a small Arkansas town and closes with her reading of a poem “about her favorite thing: hope” at Bill Clinton’s presidential inauguration. In between, it mentions the (unspecified) “attack” by her mother’s boyfriend and subsequent elective muteness she experienced as a child, as well as some of the varied pursuits that preceded her eventual decision to become a writer. Kaiser goes on in a closing spread to recap Angelou’s life and career, with dates, beneath a quartet of portrait photos. Salaberria’s simple illustrations, filled with brown-skinned figures, are more idealized than photorealistic, but, though only in the cover image do they make direct contact with readers’, Angelou’s huge eyes are an effective focal point in each scene. The message is similar in the co-published Amelia Earhart, written by Ma Isabel Sánchez Vegara (and also translated by Pitt), but the pictures are more fanciful as illustrator Mariadiamantes endows the aviator with a mane of incandescent orange hair and sends her flying westward (in contradiction of the text and history) on her final around-the-world flight.