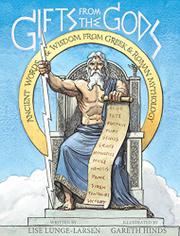 GIFTS FROM THE GODS

Countering the notion that our language just sprang into existence from nowhere, a respected storyteller offers quick notes on the Classical backgrounds behind several dozen words or expressions in common use.

Arranging her 17 main choices alphabetically from “Achilles Heel” to “Victory,” Lunge-Larsen supplies for each a use-quote, retells or paraphrases a Greek or Roman myth that explains the term’s usage then closes with quick references to several related gods or other figures whose names are still embedded in English. While “Pandora’s Box” and some other entries feature fully developed tales, others do not. The story of Achilles (whose role and death in the Trojan War are encompassed in one sentence about how, after the “Battle of Troy [sic] broke out … one fateful arrow pierced his heel”) and others are sketchy at best. Adding occasional dialogue balloons graphic-novelist, Hinds presents expertly drawn but similarly sketchy watercolor scenes of fully-clothed or discreetly posed mortals and immortals on nearly every page. While pulling modern use-quotes from current literature for kids has the potential to spice up the presentation, some works are relatively obscure (River Boy, by Tim Bowler) or above the natural audience for this text (The Face on the Milk Carton, by Caroline B. Cooney).

A quick skim of the subject—readable, but unsystematic and not well served by either the art or the dusty closing bibliography.