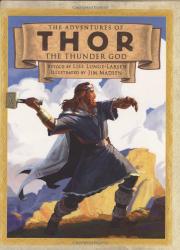 THE ADVENTURES OF THOR THE THUNDER GOD

Billing Thor as the Vikings’ favorite god, because he was “the biggest, strongest and bravest,” a veteran talespinner smoothly retells five of his better-known exploits, from feeding a poor family on two goats that magically reconstitute themselves in the morning to getting his stolen hammer back by impersonating the goddess Freya. He comes across as a blustery but compassionate sort here, ever ready to defend the gods against trolls and Jotun (giants)—though his own mother was a giant—and to forgive even the pranks of his Jotun foster brother Loki. In Madsen’s big, luminous digital paintings, the Jotun and dwarves—beetle-browed, bull-necked and scowling—look particularly thuggish next to the handsome, graceful residents of Asgard. As in the tales themselves, the tone is more comic than violent. Though the stories are easy to find elsewhere (Bruce Coville’s rendition of Thor’s Wedding Day (2005), illustrated by Matthew Cogswell, is particularly uproarious), all together they make an engaging gateway to the many larger collections of Norse myths, and are equally suited to reading alone or aloud. (source and reading lists, glossary, pronunciation guide) (Folktales. 9-11)