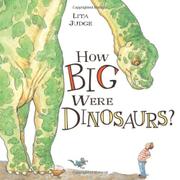 HOW BIG WERE DINOSAURS?

The title question is answered engagingly with comparisons of a handful of dinosaurs to objects and animals children will readily recognize.

Velociraptor, spreading terror in audiences since the first Jurassic Park movie, was only the size of a dog, though still pretty vicious. Stegosaurus was as heavy as three cows, but the plates on its back made it look much bigger. Argentinosaurus was the length of four school buses, but at least it was a vegetarian—it ate trees. Images of these dinos next to children, adults and common objects (note the SUV crushed by Ankylosaurus) on white backgrounds are not only amusing, but give a real sense of scale. All the people, animals and dinosaurs that populate these pages appear again, to scale, in a wonderful double foldout. Colors are clean and clear, outlines are crisp. Judge also describes how she figured out the relative sizes of the dinosaurs by studying fossils and skeletons at various museums, and she offers a very brief book and website bibliography. Perhaps a favorite might be Tsintaosaurus, which had a spike “like a giant unicorn” growing out of its head. Dino-philes, assemble! (Informational picture book. 7-10)