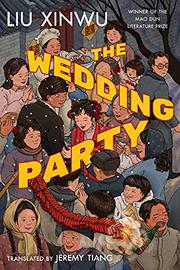 Covering one 12-hour day in December 1982, Liu's magnum opus focuses on all aspects of a working-class wedding, from the earliest preparations to the final farewells, while telling intersecting stories about the inhabitants of the Beijing building where the celebration occurs.

The novel is stuffed with Chinese history, the specifics of life in 1982 (including architecture, food, and clothing), and philosophical musings on time and what it means to be human. Each character in the Dickensian cast undergoes a private drama: They're all fully developed people, with complete histories showing the varied and complex impact of Chinese communism, particularly the Cultural Revolution, on individual fortunes. The wedding takes place in a siheyuan, a building built around a courtyard that in feudal times housed one wealthy extended family but by 1982 is divided into multiple apartments with a variety of residents, from a high-level bureaucrat and a poetry editor to a warehouse guard and a cobbler. Retired grocery store clerk Auntie Xue wants to throw her son, Jiyue, the perfect wedding, hiring young chef Lu Xichun to cook a traditional multicourse feast. The ostensible plot surrounds the wedding’s success or failure, in particular a crisis that arises over the gold-plated watch the Xues have spent their savings to buy as a gift for Jiyue’s bride. But a host of subplots involving flawed yet empathetic characters vie for attention; among them is an unflappable government bureau chief who receives a shocking letter that could destroy his career, a British-educated translator whose uneducated father disapproves of his intellectual fiance, a busybody no one likes despite her good deeds, and an opera singer whose profession and marriage collide. The novel’s heart lies with quiet, passionately competent chef Xichun, whose cooking never falters and who never loses sight of his and others’ humanity.

A deep immersion in everyday life in Beijing after the Cultural Revolution.