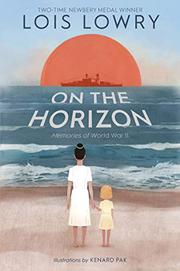 In spare verse, Lowry reflects on moments in her childhood, including the bombings of Pearl Harbor and Hiroshima.

When she was a child, Lowry played at Waikiki Beach with her grandmother while her father filmed. In the old home movie, the USS Arizona appears through the mist on the horizon. Looking back at her childhood in Hawaii and then Japan, Lowry reflects on the bombings that began and ended a war and how they affected and connected everyone involved. In Part 1, she shares the lives and actions of sailors at Pearl Harbor. Part 2 is stories of civilians in Hiroshima affected by the bombing. Part 3 presents her own experience as an American in Japan shortly after the war ended. The poems bring the haunting human scale of war to the forefront, like the Christmas cards a sailor sent days before he died or the 4-year-old who was buried with his red tricycle after Hiroshima. All the personal stories—of sailors, civilians, and Lowry herself—are grounding. There is heartbreak and hope, reminding readers to reflect on the past to create a more peaceful future. Lowry uses a variety of poetry styles, identifying some, such as triolet and haiku. Pak’s graphite illustrations are like still shots of history, adding to the emotion and somber feeling. He includes some sailors of color among the mostly white U.S. forces; Lowry is white.

A beautiful, powerful reflection on a tragic history.