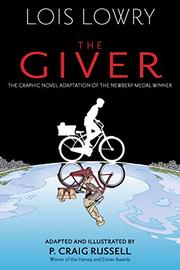 From the Giver Quartet series

An eerie graphic version of the Newbery Award–winning classic.

Russell (Murder Mysteries and Other Stories, 2015, etc.) pays no more attention than Lowry (Looking Back, 2016, etc.) did to continuity of detail or to justifying the counterintuitive notion that memories can be shed by transmitting them, but without taking significant liberties he skillfully captures the original’s full, creeping horror. By depicting human figures with uncommonly precise realism, bearing calm, smiling demeanors and moving through tidy 1950s style settings, he establishes an almost trite air of utopian normality at the outset…then proceeds to undermine it with disquieting (to say the least) incidents capped by an explicit view of Jonas’ serene dad “releasing” a supernumerary newborn by ramming a hypodermic into its head. He also neatly solves the color issue by composing his many small sequential scenes in blue pencil outlines with occasional pale washes—which makes Jonas’ disturbing ability to “see beyond,” from the red in an apple and a classmate’s hair to the garish orange memories the Giver downloads to his brain, startlingly vivid and presages the polychrome wilderness into which he ultimately vanishes. Jonas and the rest of the cast are uniformly light-skinned and generically European of feature, but that is explicitly established as part of the hideous scenario.

A first-rate visual reframing: sensitive, artistically brilliant, and as charged as its enigmatic predecessor with profound challenges to mind and heart.