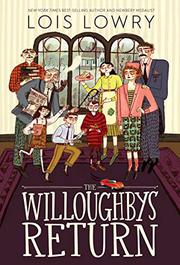 From the Willoughbys series

The incompetent parents from The Willoughbys (2008) find themselves thawed by global warming.

Henry and Frances haven’t aged since the accident that buried them in snow and froze them for 30 years in the Swiss Alps. Their Rip van Winkle–ish return is archly comedic, with the pair, a medical miracle, realizing (at last!) how much they’ve lost and how baffled they are now. Meanwhile, their eldest son, Tim, is grown and in charge of his adoptive father’s candy empire, now threatened with destitution by a congressional ban on candy (opposed by an unnamed Bernie Sanders). He is father to 11-year-old Richie, who employs ad-speak whenever he talks about his newest toys, like a remote-controlled car (“The iconic Lamborghini bull adorns the hubcaps and hood”). But Richie envies Winston Poore, the very poor boy next door, who has a toy car carved for him by his itinerant encyclopedia-salesman father. Winston and his sister, Winifred, plan to earn money for essentials by offering their services as companions to lonely Richie while their mother dabbles, spectacularly unsuccessfully, in running a B&B. Lowry’s exaggerated characters and breezy, unlikely plot are highly entertaining. She offers humorous commentary both via footnotes advising readers of odd facts related to the narrative and via Henry and Frances’ reentry challenges. The threads of the story, with various tales of parents gone missing, fortunes lost or never found, and good luck in the end, are gathered most satisfactorily and warmheartedly.