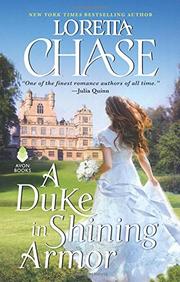 A DUKE IN SHINING ARMOR

When a duke and his would-be bride both get drunk—separately—before their wedding, the best man sets off to retrieve the bride, who's climbed out a window. A series of fateful events complicates the quest and convinces the wedding refugees they’re meant for each other.

After bookish spinster Lady Olympia Hightower saves the Duke of Ashmont’s life, he winds up offering for her, a windfall for her impoverished but aristocratic family. However, on the day of the wedding she overimbibes on brandy and gets cold feet. “I thought I was ready to make the sacrifice—though I know most people would say it’s preposterous to refer to becoming a duchess as a sacrifice,” she says. Olympia’s flight sends best man the Duke of Ripley in pursuit, since Ashmont is too drunk to chase his bolting bride. At first Ripley simply wants to get her back without ruining her reputation, but things get confusing when he winds up aiding and abetting her escape, without understanding why. Then, after she’s stood up to bullies, re-energized his grieving aunt, and shared a few breathtaking kisses with him, they realize they belong together. Unfortunately, since society frowns on bride-stealing, Ripley has to figure out how to marry the girl, assuage the ton, and save his cherished friendship. Author Chase is a grande dame of historical romance, and her latest displays the clever plotting and brilliant dialogue for which she’s known but is marred slightly by the main characters’ lurching indecision. Launching a new series revolving around three notorious libertines known as "Their Dis-Graces" is a perfect playground for this stellar writer whose spirited heroines tame rakes as well as anyone in the business.

Chase brings a fun blend of quirkiness and wit to a sexy love story that’s both charmingly romantic and laugh-out-loud funny.