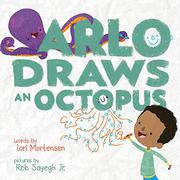 When Arlo becomes frustrated with his octopus drawing, he finds encouragement in the drawing of a newfound friend.

“One day, quite unexpectedly,” Arlo, a brown-skinned boy with curly hair, bursts into his home having made a decision: He is going to draw an octopus. But the head he draws doesn’t look quite like an octopus head. He picks up another crayon and draws eight arms. But the arms don’t look like octopus arms. By the time he finishes the suction cups, Arlo is dismayed by how little resemblance his drawing bears to an octopus. “Perturbed,” he crumples up his drawing and tosses it away. When he goes to retrieve it for proper disposal, the crumpled drawing he picks up is not his at all. It is an octopus’ drawing—of Arlo! Each subject likes the other’s rendering, and Arlo is inspired anew. Arlo’s roller coaster of emotions will feel comfortingly familiar to anyone whose enthusiasm has ever been dampened by perfectionism. When he gets back on the proverbial horse, readers will feel relief and may themselves have learned a thing or two about not being too hard on oneself. Dramatic characters in smooth colors mix with crayon-textured embellishment for an engaging foray into Arlo’s emotional journey. Arlo never questions the sudden appearance of this marine creature in his home, adding an appealing layer of absurdity and causing readers to question what’s imagination and what’s reality. (This book was reviewed digitally.)

Well-written and full of fun surprises.