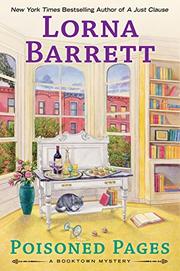 Murder and misgivings surround a small-town bookseller who teams up with her sister to prove that she’s not a jinx.

As he’s sentenced for murder, Bob Kelly turns to star witness Tricia Miles and declares her a jinx, simultaneously cursing her and blaming her for his crime. The name-calling may be cruel, but Bob’s far from the first person to notice Tricia’s tropism to homicide (A Just Clause, 2017, etc.). Maybe that’s why one plank in the platform for her Chamber of Commerce presidential candidacy is making Stoneham a safer place, along with winning the title of Prettiest Village in New Hampshire. Tricia should be a shoo-in for the presidential role. The incumbent is her sister, Angelica, who’s been trying to coach Tricia into success at their daily lunches at Angelica’s restaurant, Booked for Lunch, and dinners at each other’s homes. But Tricia has some trouble on the campaign trail that’s exacerbated when a cocktail party at her bookstore, Haven’t Got A Clue, ends with the death of Angelica’s former colleague Frannie Armstrong’s date. Chief of Police Grant Baker, Tricia’s ex, rolls his eyes at the news of Tricia’s proximity to another murder; a similar lightness attends others who don’t make it through the story without having “bought the farm.” Russ Smith, another ex, complicates her life by throwing his own hat into the presidential ring. Though he’s moved on from Tricia, he harbors hope for their future and shows it through bullying, threats, and intimidation. Worse still, Marshall Cambridge, the proprietor of the local porn bookshop, has turned his attentions to Tricia. As she tries to focus on her campaign and the dramatic news that Angelica is being blackmailed, it becomes clear that someone’s trying to vandalize her store and maybe even hurt her.

The broad style leaves little room for nuance, though it’s not always clear whether that’s a choice on the part of the author or a heroine she seems to hold in high regard for reasons that remain mysterious.