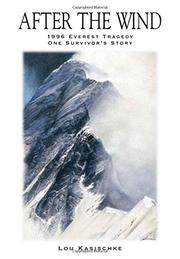 In 1996, the worst disaster in recorded Mt. Everest climbing history occurred when, due to a combination of factors, eight people died on a single expedition. This memoir is Kasischke’s personal account of how he survived.

Hours before the tragedy, Kasischke’s reservations about the expedition were mounting. Too many people were climbing the mountain at once, and despite some unnecessary delays, the leader, Rob Hall, had continued to lead the climb, although the team wouldn’t be able to reach the top and return down before nightfall—a decision so poor that Kasischke and others blame it for the climbers’ deaths rather than the treacherous storm they faced that night. Kasischke is alive to tell his tale because he chose to turn around at a critical juncture, and he admits that he shouldn’t have even gone that far. He was trapped for days once the storm hit. The author dramatically recounts being frozen, dehydrated and snow blind and says that he relied on his love for his wife and his faith to get him through. It seems that Kasischke has chosen to relive this nightmare in order to come to grips with it and to honor those who didn’t make it, as well as to add a new perspective to a tale most people know via journalist Jon Krakauer, whose very presence, Kasischke implies, played an inadvertent role in what happened. Kasischke, however, never comes across as bitter or recriminatory but simply honest. He also pays tribute to his wife, Sandy, who, despite not being physically there, was a very real presence for him throughout the ordeal. The hand-drawn illustrations by Jane Cardinal also help the reader visualize the people and environs.

A vivid, intimate memoir that, with great clarity and attention to detail, tells an unforgettable survival story.