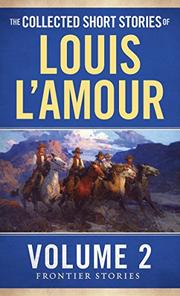 For reading under the stars.

The unimaginably prolific L’Amour—120 books still in print, 45 works filmed as movies or TV shows, over 270 million books sold worldwide—carries on from the grave. This second in a projected four-volume series (The Collected Stories of Louis L’Amour: The Frontier Stories, Volume One, 2003) reprints 30 more stories, this time featuring L’Amour’s popular hero Texas Ranger Chick Bowdrie (Bowdrie; Bowdrie’s Law).Though never a fancy stylist, L’Amour never writes with less than a saddle creak in his sentences and often enough with a desert heatwave boiling up from a sunbaked paragraph.

A master storyteller only whets the appetite for the next two volumes.