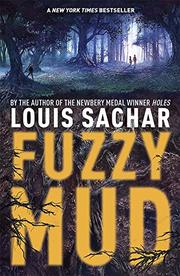 When fifth-grader Tamaya Dhilwaddi and seventh-grader Marshall Walsh cut through the woods to avoid school bully Chad Hilligas, they unwittingly set off a chain of events that threatens global catastrophe.

What exactly is that pool of mud that Tamaya notices in the woods—gooey, tarlike muck with a sheen of fuzzy, yellow-brown scum on top? Whatever it is, it comes in handy when Chad attacks Tamaya and Marshall, and Tamaya scoops up a handful and shoves it into his face. But that evening, she notices a terrible rash on her hands, and Chad doesn’t show up for school the next day. Revealed in interspersed testimony from secret Senate hearings is the fact that scientists have been researching Biolene, a viable alternative to gasoline using artificial, high-energy microorganisms. The threat of mutations and “frankengerms” had been considered negligible, but now a walk in the woods has led to the quarantine of the whole Pennsylvania town as an epidemic has spread, the airport and railroad stations have been closed, and the Pennsylvania National Guard has been called in. Sachar’s tale is slim, as is the delineation of character and setting, but the fast-paced plot and enough science to give the illusion of substance will have readers racing through the pages.

An exciting story of school life, friends, and bullies that becomes a quick meditation on the promise and dangers of modern science.