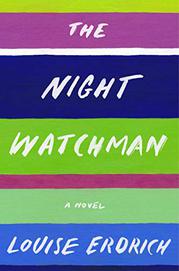 In this unhurried, kaleidoscopic story, the efforts of Native Americans to save their lands from being taken away by the U.S. government in the early 1950s come intimately, vividly to life.

Erdrich’s grandfather Patrick Gourneau was part of the first generation born on the Turtle Mountain Reservation in North Dakota. As the chairman of the Turtle Mountain Band of Chippewa in the mid-1950s, he had to use all the political savvy he could muster to dissuade Utah Sen. Arthur V. Watkins (whom Erdrich calls a “pompous racist” in her afterword) from reneging on long-held treaties between Native Americans and the federal government. Erdrich's grandfather is the inspiration for her novel’s protagonist, Thomas Wazhushk, the night watchman of the title. He gets his last name from the muskrat, "the lowly, hardworking, water-loving rodent," and Thomas is a hard worker himself: In between his rounds at a local factory, at first uncertain he can really help his tribe, he organizes its members and writes letters to politicians, "these official men with their satisfied soft faces," opposing Watkins' efforts at "terminating" their reservation. Erdrich reveals Thomas' character at night when he's alone; still reliable and self-sacrificing, he becomes more human, like the night he locks himself out of the factory, almost freezes to death, and encounters a vision of beings, "filmy and brightly indistinct," descending from the stars, including Jesus Christ, who "looked just like the others." Patrice Paranteau is Thomas' niece, and she’s saddled with a raging alcoholic father and financial responsibility for her mother and brother. Her sister, Vera, deserts the reservation for Minneapolis; in the novel’s most suspenseful episode, Patrice boldly leaves home for the first time to find her sister, although all signs point to a bad outcome for Vera. Patrice grows up quickly as she navigates the city’s underbelly. Although the stakes for the residents of Turtle Mountain will be apocalyptic if their tribe is terminated, the novel is more an affectionate sketchbook of the personalities living at Turtle Mountain than a tightly plotted arc that moves from initial desperation to political triumph. Thomas’ boyhood friend Roderick returns as a ghost who troubles Thomas in his night rounds, for example; Patrice sleeps close to a bear and is vastly changed; two young men battle for Patrice’s heart.

A knowing, loving evocation of people trying to survive with their personalities and traditions intact.