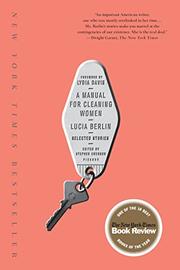 A MANUAL FOR CLEANING WOMEN

A posthumous collection of stories, almost uniformly narrated by hard-living women, that makes a case for the author as a major talent.

From the 1960s through the '80s, Lucia Berlin (1936-2004) published brilliant stories for low-profile publications—her six collections all appeared with reputable but small presses. One suspects she might have had a higher profile had her subject matter been less gloomy: she mined her history of alcoholism in stories like “Her First Detox” and “Unmanageable,” which detail the turmoil of the DTs and lost potential, and her work in hospitals in stories like “Emergency Room Notebook, 1977,” which establishes a milieu of “rich massive coronaries, matronly phenobarbital suicides, children in swimming pools.” Yet the prevailing sensibility of this book, collecting 43 of the 76 stories Berlin published, is cleareyed and even comic in the face of life hitting the skids. The title story, for instance, balances wry commentary about housecleaning work (“never make friends with cats”) and deadpan observation (“I clean their coke mirror with Windex”) with a sad, thrumming back story. Similarly, “Sex Appeal” is narrated by a girl watching her older cousin primp for a date only to realize that she herself is the lecherous man’s lust object—a discovery Berlin presents with both a sense of surprise and foreboding. Berlin’s skill at controlling the temperature of a story is best displayed in her most emotionally demanding material. In “Tiger Bites,” narrated by an El Paso woman who heads to Juarez for an illegal abortion, the pain of her experience and the pieties of her family at home collide. And “Mijito,” which deserves to be widely anthologized, exposes how an immigrant woman’s best intentions to care for her ailing son are easily derailed by circumstance and obligation.

A testament to a writer whose explorations of society’s rougher corners deserve wider attention.