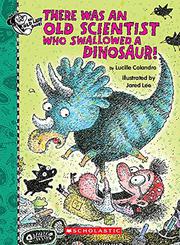 THERE WAS AN OLD SCIENTIST WHO SWALLOWED A DINOSAUR!

From the There Was an Old Lady series

She swallows a fern to feed the saurian, then a rock and a pick and a dustpan. In between the old scientist’s gastronomical feats, two children, one tan-skinned and one light-skinned—ask each other questions or spout facts about dinosaurs and paleontology. “Fossils are rocks containing traces of the past.” “Evidence of plants and animals built to last!” The book, the latest of Colandro’s many takes on the “There Was an Old Lady Who Swallowed a Fly” song, closes with the old scientist, the kids, and the dinosaurs visiting a museum of natural history. With a rhyme scheme that is often as strained as the conceit of the voracious old lady, Colandro makes another foray into nonfiction that is relatively light on facts (previous titles have explored holidays, the seasons, astronomy, and undersea life). Lee is again along to offer his signature bug-eyed and scribbly illustrations that can be a bit unnerving at times. The children’s rhyming banter in speech bubbles interrupts the old lady patter, making the whole at once familiar and clunky. Paleo facts and a scavenger hunt at the end might add to the instruction and the fun respectively. (This book was reviewed digitally.)

Not the duo’s best, but fans will enjoy the effort.