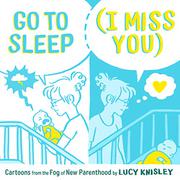 GO TO SLEEP (I MISS YOU)

Cartoons From the Fog of New Parenthood

A celebration of new motherhood, for new mothers, by a graphic artist who was then a new mother.

Knisley (Kid Gloves: Nine Months of Careful Chaos, 2019, etc.) admits that she “spent much of my pregnancy worried that having a baby would derail my work.” Instead, it gave her work a new focus and fresh meaning as well as some occasional respite from the overwhelming duties of motherhood. The author calls her latest a “baby book” and a “sketchbook,” and it is very much a work accommodating the pace and demands of having a baby. The sketches have an on-the-fly immediacy, and there’s little attempt to sustain a narrative beyond a one-page panel. Who has the time? Or the concentration? Whether she’s “running on (baby) fumes” or admitting that “some days it feels like there’s nothing left,” Knisley captures the exhilaration and exhaustion that a newborn brings to a household and its established routines. She explores “Some Unexpected Aspects of Mommification”—“you cannot think about anything bad happening to a kid without getting messed up for days”—demonstrating how motherhood changed her perspective and behavior in ways she hadn’t anticipated even though she had likely given the upcoming changes plenty of thought. For example, “I expected breastfeeding to be hard, but I had NO IDEA.” Throughout, the drawings and text capture the frenzied pace, the love and humor, the experience of feeling depleted and having nothing more to give—but then having to give some more. For all of the immediacy of the sketches, there’s also a recognition of passing through stages and enjoying what you can while you can—because “Sleeplessness, Screaming & Teething Are Fleeting!” (drawn in a manner that could serve as a tattoo).

A volume that will serve as a cherished keepsake for mother and son and will resonate strongly with other mothers.