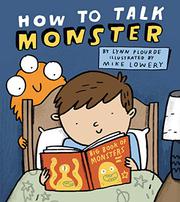 HOW TO TALK MONSTER

A young boy can’t sleep because there’s a monster outside his bedroom window!

He calls his parents to investigate, but the monster hides. The monster peeks through the boy’s window with an exclamation of “Goop-zee-googy!”…then enters the boy’s room to pinch his nose (“Zork! Zork!”). The boy is scared but musters up the courage to tell the monster to go away. He crawls back into bed triumphantly only to find the monster stealing his bicycle. When the monster crashes the bike, the boy is initially furious about the cycle’s ruined wheel despite the monster’s remorseful “Gibble”—until he notices that the monster is hurt and, just like any kid, needs some comfort and first aid. The boy realizes that the monster isn’t trying to scare him—the monster is trying to play! (Readers will have figured this out long before thanks to its expressive three-eyed face.) Together the two form a friendship that keeps them both up, making mischief despite the language barrier, until dawn. The story is drawn as a comic book, featuring speech bubbles and cartoon human and monster characters. The sparse text is entertaining and efficient, working together with the movement-packed panels to push the story forward. A backmatter Monster-to-English glossary allows readers to go back to earlier panels and translate. The boy and his parents all have pale skin.

A lighthearted take on an unlikely friendship.